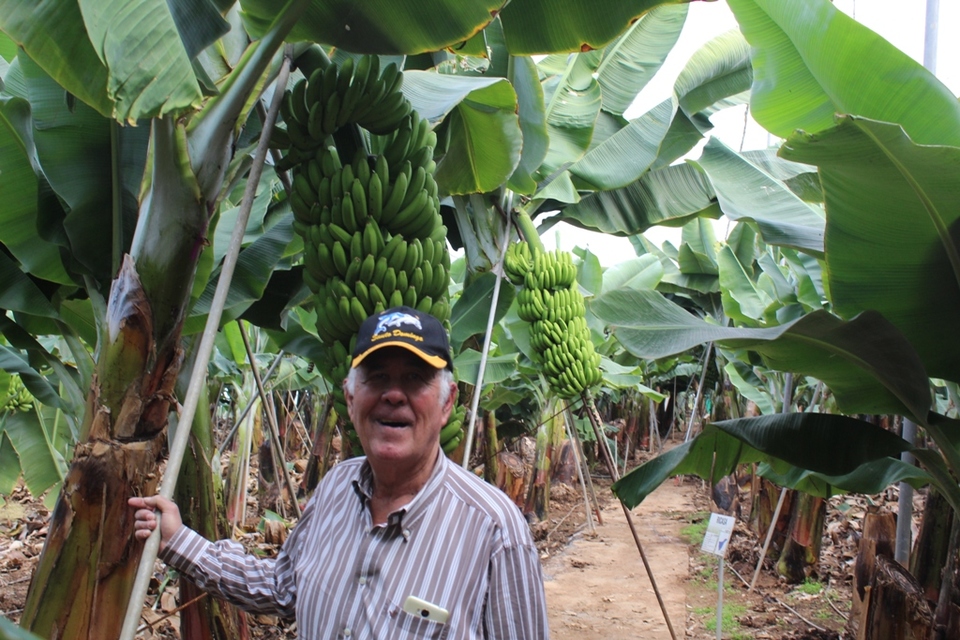 Global warming is a reality, and the only question is how can we best make use of this man-made occurrence, and how can we best reduce the negative effects.  In the main I would adjudge global warming as being a bad thing for the world. Rising sea levels and more unstable weather conditions will not be conducive to aa stable society.  From a New Zealand horticultural viewpoint the downside will clearly be the  potential of some of our better soils (in the flood plains) becoming unusable, due to flooding (caused by rising sea levels, and thus poorer river drainage), along with the problem of some crops not getting sufficient winter chilling, and failing to develop properly in the spring.

The plusside will be the potential to grow crops which would not normally grow in our temperate climate to be grown successfully because of the slightly warmer climate.  Maize might replace oats in Southland, and from ahorticulturalviewpoint tropical fruit production might become a reality in the warmer parts of New Zealand such as Northland, Bay of Plenty and Poverty Bay.    Of course the warmer conditions will probably  mean that pathogens (such as fruit flies) might become more easily established, if they manage to somehow get through border security.

I have an interest in the possible development of a tropical fruit industry in Northland, and recently spent a day near Whangarei looking at bananas.  Bananas are being considered as a commercial crop in both   Northland (Laurenson, 2017), and Gisborne, and AgResearch currently has a project to examine the potential of growing this crop in New Zealand.  The emphasis of the work being undertaken by this research group is on developing tissue culture propagation methods, along with genetic studies, but the real question is: “Is this a crop which should be grown in New Zealand ? “.  New Zealand currently obtains most of it’s bananas from Philippines (through Dole) and Equador (Chiquita).  The bananas being exported are of the Cavendish type, which are thick skinned and travel well in the green stage, before being ripened in New Zealand.  The cost of labour in these  producing countries is about $US 3/day, and the climate (in general) is much more suitable for growing bananas than in New Zealand.  Australia has a local banana industry, in Queensland, NSW (Coffs Harbour), Northern Territory, and Western Australia.  The retail price of bananas in Australia is generally higher than in New Zealand, due to the higher production (labour) costs, even though the climate is much more suitable.

Earlier this year I recently spent a few days on the island of Tenerife  (one  of the Canary Islands in the Atlantic Ocean), where I was shown some banana growing operations by Dr Victor Galan Souca, arguably the world expert on sub-tropical banana production. All the research evidence shows that yield and quality of bananas is greatly enhanced in the sub tropics by using protected cultivation methods (ie plastic greenhouses or even netting,  Victor explained to me that although production under netting or plastic greenhouses is the preferred production system,  this is limited in Tenerife, as tourism is also an important industry, and the greenhouses are regarded as environmentally not desirable.  Wind is a major factor, and so unprotected bananas are grown in the well sheltered sites and greenhouses used elsewhere.  Banana plants produce approximately 1 leaf per month, and it is important that the leaves are not damaged by wind. 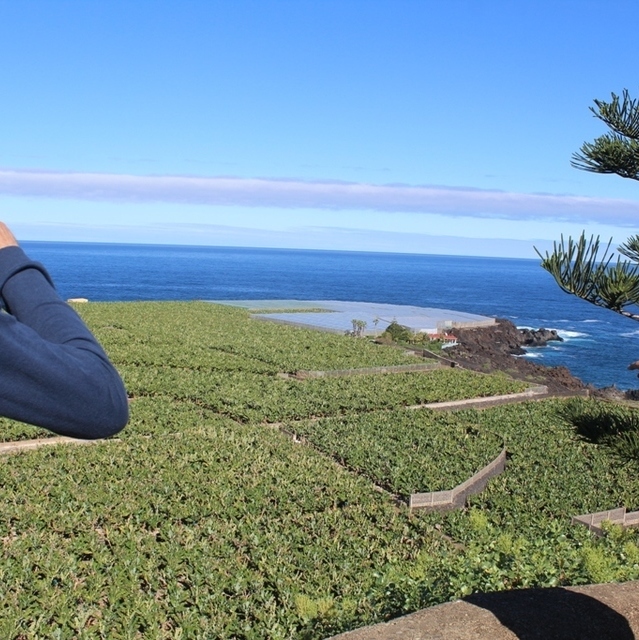 As is well known, the rain in Spain falls mainly in the mountains (not the plains—as suggested in My Fair Lady), and Tenerife is no exception.  Irrigation (by drip) is essential, the water being sourced from horizontal bores into the mountains, rather than vertical bores in the coastal plain, which tend to be saline.  Unlike the rest of EU, which obtains it’s bananas from Central America and the Caribbean, Spain sources it’s bananas from the Canary Islands, and restricts imports from countries with cheaper labour.   This is really no different from the Australian scene, where bananas are grown locally and imports are restricted to protect the local industry.

Bananas are an interesting crop, as they prefer warm temperatures, but not over 35C which poses problems in some countries as Mediterranean and Middle East countries regular have summer temperatures in excess of 40C.     This is why the humid tropics are probably the most desirable climate.  Whether New Zealand could (or should) develop a local banana industry is a matter for conjecture.  Protection from imports is clearly not a possibility with our free trade philosophy, and competing with counties where horticultural labour is paid $US3/day (against our $US12/hour) is clearly a major-issue.   Perhaps the solution will be to continue to import the standard “Cavendish “type bananas, but to produce locally the high quality thin-skinned “gourmet” bananas such as ladies finger, which do not travel well.

While in Tenerife I was shown other tropical fruit crops which might have some potential in New Zealand.  Mangoes were being grown under plastic clad greenhouses, and I heard about the potential of growing papaya hydroponically in plastic greenhouses in sub-tropical climates.  In fact there is a symposium currently being organised on papaya in Almeria (Southern Spain) for November 2020.  Almeria would have a climate not dissimilar to northern New Zealand, and is the most concentrated area of greenhouses (predominantly clad with plastic film) in the world.

Over the years there have been a number of growers (eg Dick Endt) who have promoted, tropical and sub-tropical fruit production in New Zealand, but without any significant success.  Possibly they were ahead of their time, and the cheaper (mass produced) high plastic tunnels had yet to be developed.  Certainly the advantages of growing banana under high plastic tunnels in marginal climates is now well documented.      (Gubbuket al, 2017)

Pineapples are imported from the Philippines,  and could easily be produced in Northland hydroponically in plastic greenhouses using the variety MD-2.  (In fact there is a grower near Whangarei, Owen Schafli – Bonza)

Other tropical fruit crops which deserve some consideration are lychees, rambutan, longan, starfruit, and maybe even durian,   Certainly it has always amazed me that passion fruit is not grown under high tunnels hydroponically in New Zealand, as the  plant is so susceptible to root problems, and seems to crop much better in warmer conditions.

The tremendous increase in interest in avocadoes, and it’s known objection to wet feet is another (not even tropical) crop which could respond to some environmental protection.

Many years ago (in fact 1991) I presented a paper at a tropical fruit conference in Pattaya City (Thailand) (Nichols, 1992), in which it was suggested that the tropical fruit researchers could learn a great deal by examining the experiences of the temperate fruit researchers. The paper was  referring specifically to the use of dwarfing root stocks, and high density planting, but also referred to the fact that in deciduous fruit trees flowering usually followed a dormancy period (winter) and that the equivalent in the tropics was the dry season.  Thus there could be a potential in the tropics for the year round production of “seasonal” tropical fruits simply by controlling the moisture status of the plant (a drought dormancy).  Dwarf trees and high tunnel greenhouses could be a possible solution to the year round production.  Certainly the dwarfing rootstocks are starting to appear (see photograph of dwarf mangoes in Queensland), and harvesting fruit from the ground rather than from high ladders is a basic management tool.  At a research station on the Atherton Tablelands (North Queensland) a few years ago I wsa shown a trial area of mangoes grafted on to dwarfing root stocks. (see photo)  An ideal size for growing under tunnels in a cooler climate.

Thus it could well become feasible to produce many of these fruits which currently are either not available in New Zealand, or are extremely expensive because of the need to use air freight.

With our well justified concern about possible fruit fly and other biosecurity incursions the possibility of producing tropical fruit in New Zealand might be a useful strategy to reduce risk.  Our main fruit exports to many countries are made easier because of  our freedom from a number of major pests and diseases, and to reduce the possibility of  the entry of such problems into New Zealand may be, in itself, an excellent reason for developing a local tropical fruit industry.

This article first appeared in Vol 92 of "The Orchardist: is is reproduced with the kind permission of HortNZ and Dr Mike Nichol. 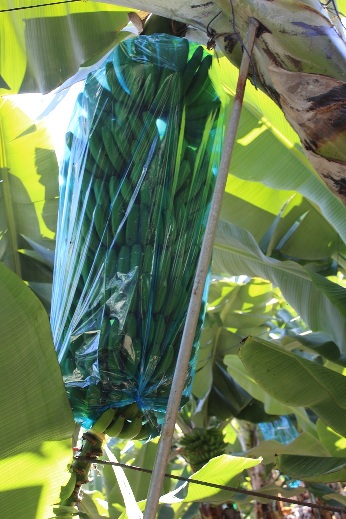